A Small Pile of Knitted Gifts

I did not do very much holiday knitting this year, owing to several factors.  I usually make several things for family members, but this year the powers that be decided that we should only give gifts to the children, so I complied.  My nieces and nephew have received quite a few hand knits from me over the years, and I decided to spare them this year.  Its not that I don't think they like such things, but I rather suspect that they prefer toys or "cool" things a bit more. Though I consider hand knits to be the coolest of cool, I don't expect this opinion to be shared by everyone.

But, after a lovely visit with some distant cousins in Belgium, I saw and seized an opportunity to knit some gifts, and finished the last one today.
We first met my cousins Chris and Tim nearly 30 years ago when they visited us in Illinois.  Though we often received relatives visiting from Belgium when I was a child, all of them were my grandparents' age and for all that they were kind (and often bore gifts of exotic candy) they were not very interesting to me.   I was thus predictably thrilled when a woman my parents' age visited one spring with her charming little son Tim.  Tim is a year or so my junior, but I being the eldest and closest to him in age, quickly commandeered him for most of his visit.  I recall being very envious and full of admiration for how well he could speak English, seeing as how I knew only a word or two of any foreign language at that time.

I think we may have exchanged one ot two letters after their visit, and as children do, lost touch.  Fortunately my mother is a lot better at keeping in touch with people, and when Brian and I planned our December trip I asked her to see if she could get in contact with Chris and Tim.  In due course we connected, and as arranged, they met us at the train station in Brussels, where we shared a lovely afternoon that was one of the highlights of our trip. 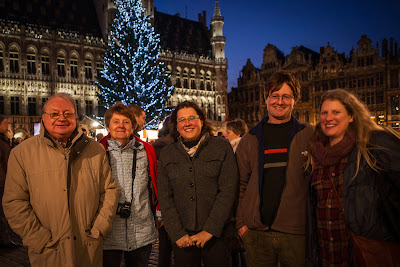 Farthest left is Gilbert, Chris's partner, followed by Chris, Tim's sweet girlfriend Els, and Tim.  Tim looked exactly as I would have expected, all grown up.  I found it quite amusing that upon seeing me both Tim and Chris commented that I was not wearing my glasses, as they no doubt recalled me as an awkward 12-year-old, resembling nothing so much as an spindly owl with my mousy brown hair and huge plastic tortoise shell framed glasses.

We had a delicious dinner at a pub on the square, and wandered through the Brussels Christmas Market with Tim and Els, who we discovered have very similar interests to us.  Tim, in fact, works for the community environmental department, and lives in the country, raising a few pigs and chickens.  Els likes to knit, and Tim described camping and hiking trips they have taken together. 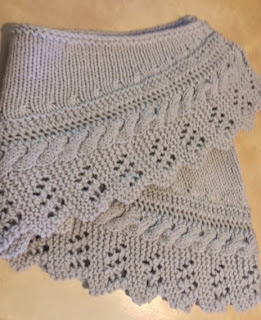 For Chris, a little shawlette based on the Maluka pattern.  I say based on because the bit that I turned into a cable I don't think was quite supposed to be a cable, but since I could not make out what exactly it was supposed to be in the chart, mine has a cable. This is a really great pattern and I want to make more of these.  Is easily adjustable for different yarn weights (I used a sport weight wool for this one, but the brand escapes me and the label has vanished) and is a very fun knit.

I understood from our dinner conversation that Gilbert had been in the military.  As he is not in possession of a large quantity of hair, I thought he might like a soft cozy watch cap, which I made from one of my favourite yarns, Hanneke Exotics 65% merino/35% linen. 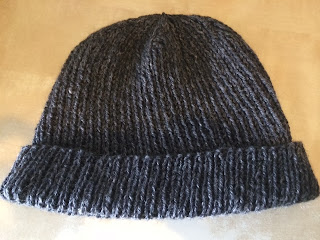 For Tim I knit a quick scarf, with a reversible stitch pattern, from a Zen Yarn Garden merino/cashmere. 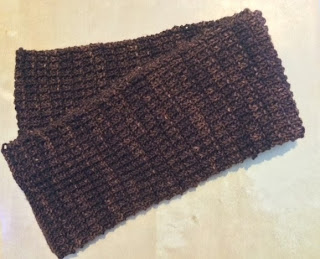 I decided to give Els the pair of fingerless mitts that I started on the trip, thinking she might appreciate such a thing, being a knitter herself.  This is the October Leaves Fingerless Mitts pattern, using Mountain Colors Bearfoot. 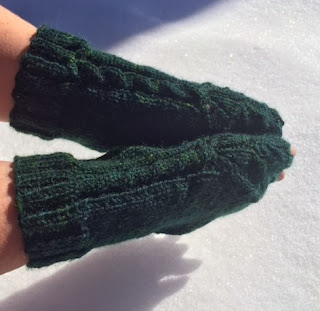 You can't see them very well in my sad IPhone photos, but the thumb gussets are formed by darling little lace leaves.  I love these mitts - I'll definitely be making more pairs of these.