More of a Knitter

I am more of a knitter than a weaver.  I weave a little on Schacht Flip Rigid Heddle Loom.  I am not very good at it, I am afraid.

Nevertheless, last weekend I decided that I would warp my little loom and weave a project with a Cat Mountain Fiber Arts Fusion 800 Skein.  To my delight, I was recently accepted as a vendor at the Intermountain Weavers Conference and I really need some hand woven samples to show how this yarn looks woven.

After dusting off and unfolding my loom, I realized that I did not know where my warping peg was.  Correction: I knew precisely where the peg was, but the whereabouts of the clamp that I needed to hold the peg to the table remained a mystery.  Not to be deterred, I devised substitute for a warping peg.  I am too embarrassed to post photos of this, but suffice to say it involved a folding chair turned upside down with the legs up in the air, placed about 6 feet from the table where I braced the loom.  Off I went, using a direct warping method. I used the six different smooth strands of this eight-textured skein for warp, thinking that they would be less likely to break or fray than the two fuzzy yarns would. 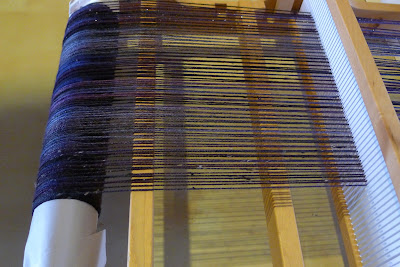 Feeling Very Accomplished and Clever, I tied off the warp strands and got ready to weave.  And promptly realized that I did not have a shuttle at the house.  (I do have countless sets of knitting needles at the house, please refer to the title of this post.) 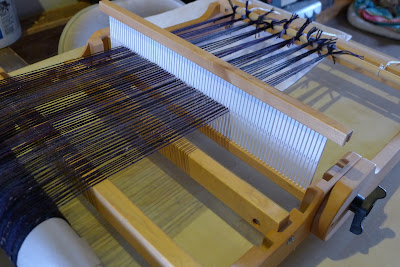 So my weaving project had to wait until this weekend.  Fortunately I remembered to bring a shuttle home when I was at the studio on Friday and now have nearly finished a scarf. 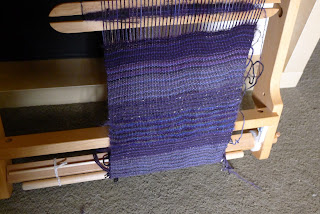 The colorway is "Ancient Mariner." I am using all of the eight textures as weft, and with little rhyme or reason, am just weaving an inch or two with each one and then changing to another.

My selvedges aren't that great (again see the title, and the first paragraph, of this post), and I am seeing some waves in the fabric.  I think the waves are a result of using six different types of yarns with different fiber content as warp - they stretch differently than one another.  For example, the 100% superwash merino is stretching quite a bit, while the 50/50 merino/tencel blend is not stretching much at all.  I think it will all be okay when its finished, which I hope will be later today.  Very likely a real weaver who is not a hack like me could verify this.  Happy Weaving!
Posted by kimberly at 1:07 PM