First I want to start off by saying Andrea Mowry is a genius.  I have knit several of her patterns and they are all exquisitely written, very clear and just so clever.

First the Fades, oh the fades. Love them!!  I am not comfortable confessing how many of them I have knit to date.  Maybe when I get to know you a little better I will tell you. 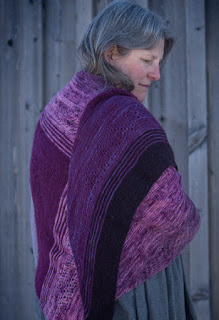 So then this Nightshift shawl came up in the Ravelry top 20 patterns.  And stayed there. And stayed there, sometimes falling out of the top 20 but I've never seen it out of the top 40.   I didn't actually like it at first, because it seemed too big, blocky and chunky.  Then I saw a few up close and thought that it actually was pretty cool looking.

And just let me gush for a minute here.  Have you seen the flipping darling "Shifty" sweater yet?  It is so cute.  Not for me, mind.  We's way too big of a girl for a cropped sweater with horizontal-ish stripes, but I have a few skinny pants little nieces that it would be very cute on.  Right, done gushing for now.

Being someone who now only buys "other" yarn under the rarest of circumstance (since I make my own) I decided that rather than spend nearly $200 for the yarn it calls for (which I am sure is awesome yarn and well worth the price - I'm in no way disparaging it) I piddled around with some colors in a nice DK weight that I get from one of my suppliers.  Its an 85% Polwarth Wool and 15% Silk blend that blooms delightfully when its dyed, and is super soft to boot.  I liked the way the colors in the pattern sample looked, so I tried to get reasonably close to those. 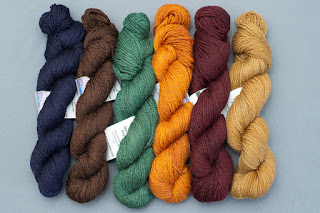 Yummy earth-ish tones.  My favorite is that carmine, second from the right.  When I was first knitting it, I actually went back to my original "too blocky" opinion, and didn't like it much.  I decided I was going to soldier on at least until I got through the initial section, where you knit the first background color completely through with all of the other colors.  As soon as I started with the second background color, I decided that I did, in fact, love it.  Abso-freakin genius pattern.  Here it is finished, whee! 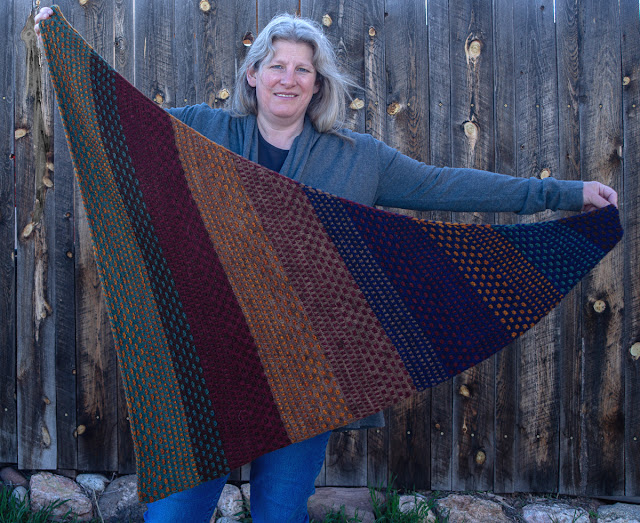 Next, I did something I have never, ever done.  (Ok, maybe I did do this on those darned addictive Find Your Fades.  Seriously though we are not going to talk about that.)  This thing was so fun, I immediately started another one, and whacked it out in about 2 weeks.  It would have been faster if I had not been frantically dyeing as much yarn as I could for my first time vending at Maryland Sheep and Wool Festival. 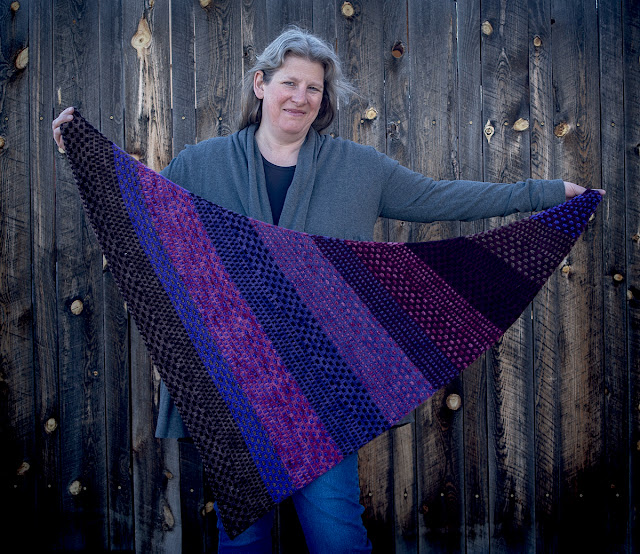 I'm knitting something else right now, but I have to own up to fantasizing about one in beiges and browns.  I even have a color name picked out.  Stay tuned for that.

Since you asked, these are available now as kits, currently in our Etsy Shop and very very soon on The Yarn Gallery web site.  The first one is named "Eartha" and the other one is "For the Love of Purple."